We live and work in a small town called Nádudvar, 200 kms from Budapest. Our town, which has about ten thousand inhabitants, lies in an agricultural area in the north-east part of Hungary and is surrounded by the ‘Puszta’ of Hortobágy. The town’s spa with its thermal water attracts many tourists every year. However, the main attraction for visitors is the black pottery made here.

There are documents saying that potters have lived and worked here since the eighteenth century. At the beginning they made black pottery but from the end of the nineteenth century they started using other colours to such an extent that finally no potter made black pottery at all. The production of black pottery started to flourish again only in the 1950s. The technique of producing the famous black pottery of Nádudvar has been inherited from father to son in the Fazekas family – which I am the member of – for almost three hundred years.

The process of making black pottery is the following:

First we mine clay containing a large amount of iron in the area surrounding our town. Then after cleaning and preparing the clay we put it into a cellar and let it rest for at least a year. Then we start forming pots from the clay. The technique of making black pottery differs from that of making glazed pottery in the way the pots are ornamented and baked. There are three types of ornamentation to choose from when preparing black pottery. We either scratch the raw (semi-finished) dish with a sharp tool or rub it with river gravel. In the latter case the rubbed surface is glossy and it will become glittery while we fire the dish. The third way of ornamentation is not wide-spread. In this case we form different patterns from the clay and press them on the surface of the raw dish. The last and also a very important step of the procedure is how the pots are baked. When the dishes are fired we shut the holes of the stove to reduce the iron content. Meanwhile coal in the smoke diffuses in the dish. The last two processes result in the peculiar black colour of the final product.

Earlier the pottery of Nádudvar was used for carrying and containing water in it. However, this function has disappeared by now and the black pottery is only used for decoration. 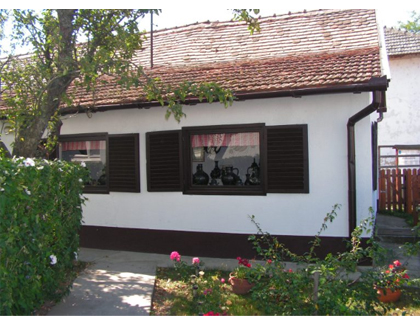